In Search of the Big Five

As much as my life here in Kenya is about studying development issues, it's also, let's admit, about being just the teeniest bit touristy. And what's Kenya without a safari? My parents have been in town for about a week, and we spent the past weekend in a truly gorgeous spot in the Masai Mara, Kenya's largest game reserve, taking in the sights and enjoying a much slower pace of life than Nairobi.
Friday afternoon we took a teeny tiny plane (as most of you can probably imagine, my dad was not very happy with this!) into the Mara - it was about an hour flight. When we got in to the very swanky Governor's Camp (one of the few camps actually in the Mara), we were greeted with hot towels and iced passion juice. What a great welcome! We had a bit of time to relax and get settled into our tent, then we went out on our first game drive of the weekend. Being novice safari-ers, we were totally excited to see all the elephants, hyenas, and zebras, and the highlight of the drive was getting to see a few members of the Marsh Pride on our way back in. Gideon, our driver, was great the entire weekend - he was so good at spotting animals way off in the distance and took great pleasure in explaining to us all of what we were seeing. For most of the weekend we were paired with a really sweet British couple, Shirley and Ian. Ian owns a factory just outside Nairobi which prints shillings and passports. This wasn't their first safari, so they were also really helpful in explaining to us about all of the animals we were seeing.
We got back and had about an hour before dinner, which we spent chilling at the bar. Dinner was fancy and very good, and we were all in bed soon - it had been a long day. The next morning, we were woken up at six by our tent steward, bearing a much-needed tray of hot tea and coffee. Our first game drive of the day was at 6:30 (since it's cooler, the animals are more active), and we got to see Marsh Pride coming back from a night of hunting! It was awesome - Romeo, the dominant male of the pride, even "marked" our Jeep! After some riding around, we headed back for a full English breakfast before our 10:30 game drive. For our second tour we took it a bit slower, lazing by the Mara River and watching the hippos and crocs. As we drove through the forest, we were greeted by a very cute giraffe and one not very happy elephant who tried to charge our Jeep - scary!
After lunch, we took a much-needed nap, then headed out for our final game drive of the day. Gideon had heard rumors about some cheetahs about a half-hour drive away, so we went off in search of them. It took a lot of driving and a good deal of frustration, but we finally found three cheetahs (a mom and two sons) just as the sky opened up and it started to pour. The cheetahs obviously weren't enjoying the rain, but it made the weather a bit cooler, so it was really fun to watch them frolic.
Sunday Shirley and Ian suggested we combine our two morning game drives and take our breakfast out by the river, which we thought was a great idea. We stopped at a really pretty spot and got to eat as we watched hippos laze in the river - definitely a cool experience. We had hoped to try to find a leopard that day, but no luck. Instead, we spent most of the drive taking in some truly amazing vistas of the Mara (surprisingly, it isn't all flat, but rather has a few scattered hills, and the land kind of undulates). We saw a lone wildabeast (not very pretty animals!) and a lot of things we had come to think of as "standard" - a giraffe, lots of elephants, hyenas, tons of zebras and different kinds of antelope and gazelles.
All in all, it was a fantastic trip. Governor's Camp was truly luxurious, and it was really nice being in the Mara rather than having to drive in from an off-site location every day. Plus, the camp isn't fenced it, so at night we fell asleep to (or were waken up by!) the sounds of elephants and hippos wandering through the camp. Our first night there, a few elephants literally walked right past our tent! Though the camp was definitely touristy (and rich!) it was a great experience, and it was very cool to see such a different side of Kenya than the crazy, smoky, chaotic scene that is Nairobi.
Below are some pictures (out of the like 300 that I took over the course of the weekend!)
PS - I almost forgot! For those who are wondering, the "big five" are lions, leopards, rhinos, elephants, and buffalos. We saw three of the five - not bad for a weekend! 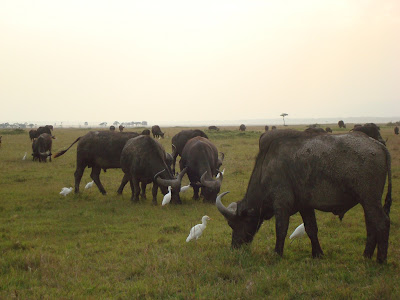 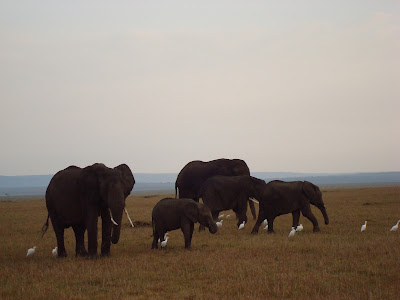 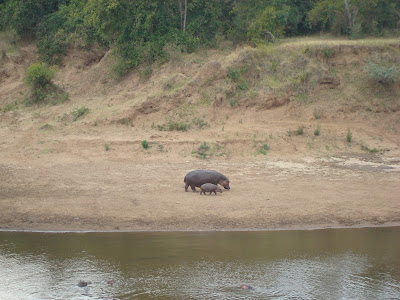 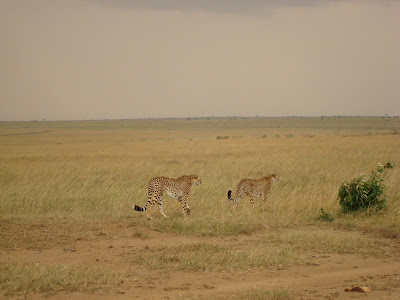 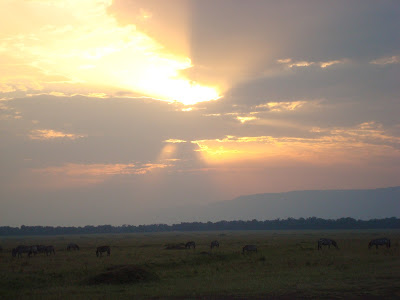 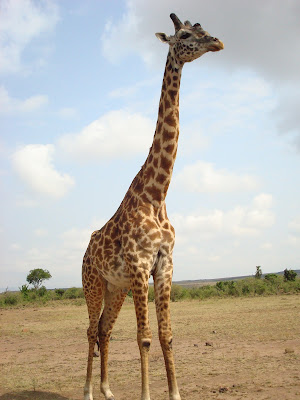 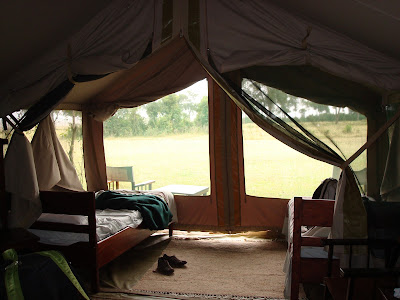 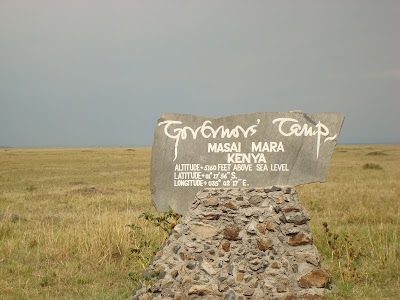